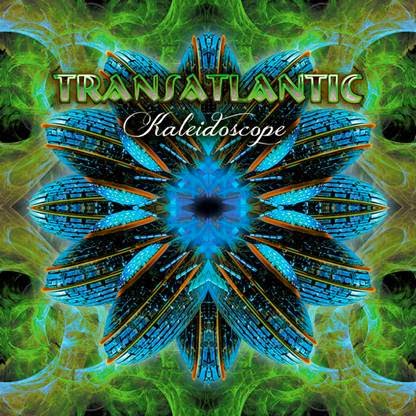 Good things come to those who wait. Transatlantic fans are accustomed to playing the waiting game, and their patience has been rewarded with the band's fourth official studio album, Kaleidoscope. Steeped in vibrant prog rock organics, it's a triumphant return to the band’s original creative style.

The beloved prog rock project featuring Neal Morse (ex-Spock's Beard), Mike Portnoy (The Winery Dogs, ex-Dream Theater), Roine Stolt (The Flower Kings) and Pete Trewavas (Marillion), Transatlantic's foundation was built in 1999 with the release of their debut album, SMPT:e, in 2000. A second studio album, Bridge Across Forever, solidified their position as prog’s definitive supergroup. It would be nine years before Transatlantic’s fans were rewarded with a new studio album: 2009’s The Whirlwind, the band’s most popular release to date. Following the subsequent tour, spawning two live DVDs, the band decided to record a new studio album as soon as they could.

"There was talk about a year ago about doing an album before we actually did it," reveals Morse. "I was feeling it for a while. Some of the music that ended up on my Momentum album (2012) seemed like good material for Transatlantic. Roine and my schedules have a little more space in them, and Pete and Mike's schedules finally aligned, so we were able to put this together. I'm just glad we got to do it again and I'm really happy with the way the album came out."
Morse, Portnoy, Stolt and Trewavas shared equally in the songwriting, with Portnoy ultimately sifting through the material and picking out what he felt was best. For the most part, the music that fans hear on Kaleidoscope (and all of their previous albums) was created for Transatlantic. There are, of course, exceptions. “I wrote the second song on Kaleidoscope, “Shine,” before my Momentum album came out," says Morse. "I thought about recording it for myself, but it just smelled of Transatlantic. I presented it with two other acoustic songs, and that’s the one the other guys chose, as well.”

The band convened at Neal’s studio in Tennessee; writing, arranging, and laying down the final drums and bass. Morse offers, “At this stage, we sketch out the house and build the foundation. Then Roine and I go off to our respective studios and do what we need to. We send those parts, including vocals, back and forth via the internet; but the writing is done together in Tennessee. We just go from the gut, and I think it's an amazing process of trusting each other. There's no shortage of ideas; it's more like which ideas do we want to use?"

As the fans have come to expect, Kaleidoscope is also available as a Special Edition featuring eight uniquely Transatlantic cover songs. "I don't know how it started," Morse says of the cover song tradition. "But we've done it for every album. It's a lot of fun because most of the time it's simpler music than what we're mainly involved with."

There are points during the journey through Kaleidoscope where the listener will be reminded of artists like Yes, early Genesis, and even Styx. But in the end, the album is distinctly Transatlantic before it can be compared to anyone else.

"I think that comes from the different ingredients," says Morse. "It's the four of us from all over the world—with our different backgrounds, cultures and musical history—that makes this band totally unique."

The band will embark on a six-week world tour January 31 – March 15, with an additional performance at the Sweden Rock festival June 4-7. They will be joined by Pain of Salvation’s Daniel Gildenlöw as a 5th touring member. The tour will include headlining the Progressive Nation At Sea 2014 Cruise,February 18-22, alongside 22 other leading prog acts including Adrian Belew Power Trio, Devin Townsend Project, King's X, Anathema and Spock’s Beard. The event will also feature a special performance of Yes material by Transatlantic with legendary singer Jon Anderson on vocals.

An Evening With Transatlantic 2014 World Tour