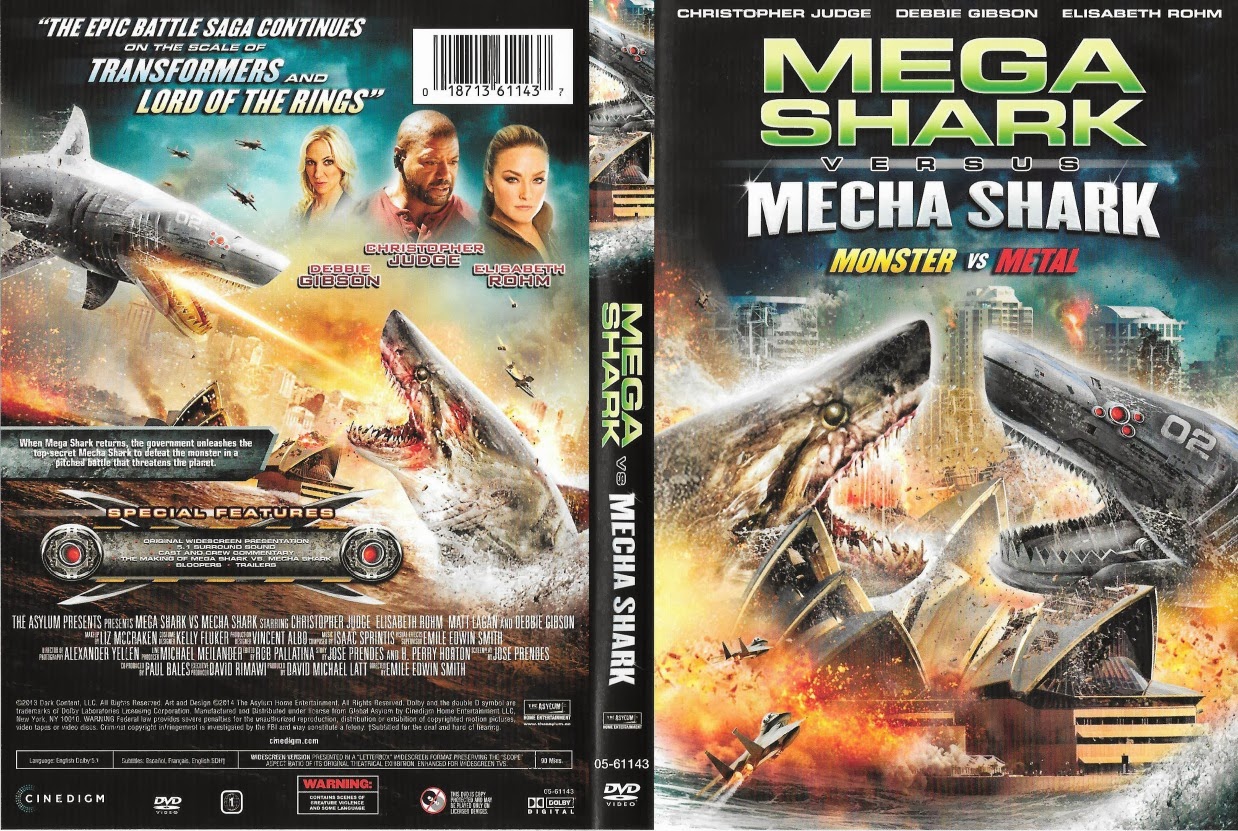 Released yesterday at your local DVD establishment is a terrific modern day monster movie. The same company that recently gave us last years hit, Sharknado, now puts forth; 'Mega Shark Versus Mecha Shark'. Another addition in what is now a successful series of films with the words MEGA or MECHA in the title. Same little film company out of Hollywood California that makes those far out original movies that cable's SYFY Channel loves to air. As do other cable channels as well. Another new film recently put out there by
The Asylum, 'Mother', staring Daryl Hannah is making the rounds as well on the Lifetime Channel.

Word on the street is that The Asylum only makes rip off movies. Something similar to whatever new and popular motion picture is playing at the local theaters. Example, do they have something just like Robo Cop coming out soon? Sure they do; Android Cop. I saw the previews. Looks real bass ass !! Looking forward to viewing that one. Fact is The Asylum makes from what I seen, pretty cool popcorn flicks (mostly all of them are that I'm aware of) that sometimes have a somewhat familiar vibe to it. Done in their own unique style. We're taking B-Movie budgets. What drew me in was their sci-fi and disaster films. Yeah...the same stuff they run on the SYFY Channel. A lot of these are just plain fun, and entertaining. Takes my mind off the more serious things in life. Kick back and relax while watching the Earth in peril AGAIN (common plot).

'Mega Shark Versus Mecha Shark' is a throw-back in my opinion of the old Godzilla monster films. Has the same vibe to it. It's storyline simple, Mega Shark is loose, dangerous to all mankind, and it needs to get killed. Bring in the military. And from earlier “Mega Shark” movies, Debbie Gibson. All grown up now, for this is a new 2014 direct to DVD / Cable TV project. Her character in this outing concludes the Mega Shark is horny. Their job is to STOP the Mega Shark in it's tracks, but in a way you hoping in the back of your mind, that they don't. After all if Mega Shark finds a mate we can have ten more Mega Shark sequels, and give Gibbon work till she reaches retirement age. Other characters include a brilliant and ballsy interracial couple, and a military superior officer fighting his what ends up his ultimate challenge.

Special effects, and the over all look of this new Mega Shark chapter is better then hoped. Independent film studios just don't have the dollar power of the BIG companies out there in Hollywood nowadays. That's part The Asylum's charm. They make best with what they got. Example, this film was shoot in fifteen days. After seeing it, you'll be amazed by just that fact alone. Nothing looks really cheesy here. The dialogue and storyline are tight. Accept it for what it is; a cool nights entertainment. For just ten dollars, the price I paid at my local Walmart, the family can gather round the wide screen, pop some popcorn, and have a ball watching the two GIANTS battle it out.

Regarding the Mecha Shark itself, filmed so it was made to look like it was really real. Job well done! I also liked Mecha Shark's personality, as well as versatility. Good on land, or underwater.
Rating: Using a one to ten star rating system, Uncle G rates The Asylum's 'Mega Shark Versus Mecha Shark'; 10 STARS. It is what it is; a fun exciting Saturday Night B-Film popcorn flick. To all at The Asylum; WELL DONE !!