Supreme British melodic hard rock group Magnum have confirmed the release of their utterly compelling new studio album, ‘Escape From The Shadow Garden’ on Steamhammer / SPV on March 24th. Like a vintage bottle of champagne, Magnum just get better and better with age, and never is this more evident than on ‘Escape From The Shadow Garden’, the band’s nineteenth studio album.

Magnum mastermind Tony Clarkin started working on ‘Escape From The Shadow Garden’ merely a month after the release of its illustrious predecessor, ‘On The 13th Day’, which crashed in to the UK national album chart at 43 and number 3 on the Rock & Metal chart, on release in October 2012. But as with all artists, creativity never comes at the push of a button; either angst or a certain amount of peace and serenity is required for inspiration, and Clarkin is certainly no exception to this rule. “We used to be under permanent pressure from our record companies” he notes, recalling that “They kept calling us, demanding hit singles and radio numbers. But that sort of thing doesn’t work on demand. Now we’re with SPV, where it’s a totally different situation. They give us the necessary time and trust us to do the right thing. That’s probably the reason why I enjoy working with Magnum again.”

Clarkin’s regained joy is omnipresent on each and every one of the eleven wonderfully melodic, timeless, distinctively classic Magnum rock songs on ‘Escape From The Shadow Garden’. Tony modestly explains that “I simply told myself: you’re a passable guitarist, so you should play the guitar. As the band’s guitarist and producer, I have all the freedom I need to create exactly what I feel like creating. This band has certain unmistakable trademarks; among them are my feel for melodies and Bob’s unique vocal style.”

Particularly spangling gems of new songs on ‘Escape From The Shadow Garden’ include epic opener ‘Live ‘Til You Die’, the groove-laden, hard rocking ‘Too Many Clowns’, the poignant, balladic ‘Don’t Fall Asleep’, and gorgeous album closer ’The Valley Of Tears’, with its tinkling ivories and luscious soundscapes. A month after release, Magnum head out on a thirteen date April / May UK tour. Dates are:-

Magnum, who regularly breached the Top 40 of both the singles and album charts in the Eighties and early Nineties, came together in the Midlands in the mid-Seventies and released their debut album 'Kingdom Of Madness' in 1978, followed by 'Magnum II' in 1979 and their first live album 'Marauder' in 1980. During this period they toured relentlessly with the likes of Def Leppard, Blue Oyster Cult and Judas Priest.

1982's 'Chase The Dragon' album was the first to go Top 20, and was accompanied by a sold out UK tour. 1983's 'The Eleventh Hour', 1985's 'On A Storyteller's Night' and 1986's (Roger Taylor produced) 'Vigilante' album all fared similarly well but it was 1988's 'Wings Of Heaven' LP which really broke the band into the mainstream, going gold, breaching the top 5 of the UK chart and spawning three top 30 singles - 'Days Of No Trust', Start Talkin' Love' and 'It Must Have Been Love'. During this period the band regularly graced the stages of such venues as Hammersmith Odeon and major UK Festivals as Reading and Castle Donington.

1990's 'Goodnight To L.A.' album also went Top 10, spawned the Top 40 single 'Rocking Chair' and was accompanied by a tour of the UK's Arena circuit, including venues such as Wembley Arena and the NEC. 1991's 'The Spirit', 1992's 'Sleepwalking' and 1994’s 'Rock Art', were followed by the announcement of the band’s demise and an extensive farewell tour, during which the band's 1996 live album, 'The Last Dance' was recorded.

Clarkin went on to work as a producer and songwriter for other artists, brought out two albums with Bob Catley in Hard Rain ('Hard Rain' in 1997 and 'When The Good Times Come' in 1999), and generally recharged his musical batteries.

Then, in the summer of 2001, Magnum reformed and began writing their February 2002 ‘Breath Of Life’ album, released 8 years after ‘Rock Art’. "It was particularly inspiring for me to write and produce new material for Magnum,” Clarkin enthused at the time, continuing that "Compared to the Hard Rain tracks, the Magnum compositions are powerful, deeper, and more passionate.”

Now ‘Escape From The Shadow Garden’, the cover of which has once again be created by fantasy artist Rodney Matthews (Asia, Nazareth, Eloy); “Is a release which forges an arch to the early days of Magnum’s career” muses Clarkin, adding “And that’s wonderful! I was really happy when my friend Jimmy Lea of Slade came to visit me at the studio again and said: ‘You’ve done it again?’ 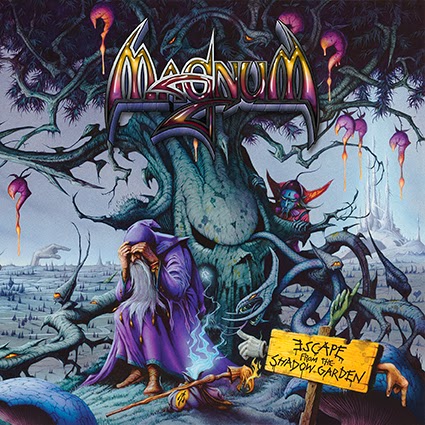 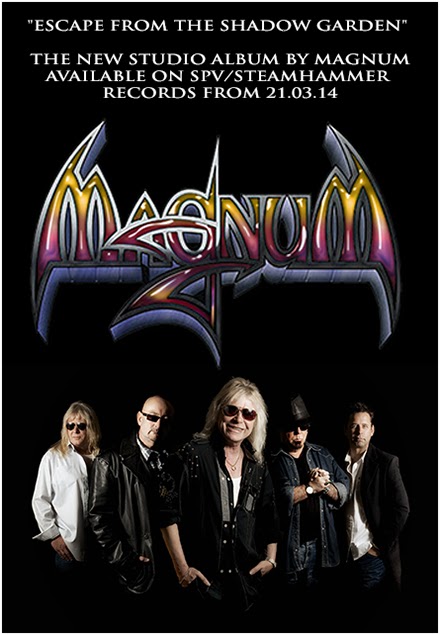