Pretty Maids New Album Louder Than Ever Released In March 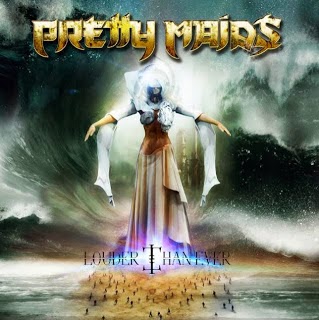 Pretty Maids Louder Than Ever

After celebrating their 30th Anniversary as a band and the release of their latest monumental release “Motherland”, the  Danish melodic hard rockers are serving the fans with "Louder Than Ever". This is not a completely new album but consists of seven re-recorded classic songs from the 1995 - 2006 era plus five brand new songs specially written for this record and a special bonus DVD including archive footage from the 80’s, brand new interviews and plenty of cool material for the fans!

“The reason for doing this project is to give those songs a different spin with the band and producer we have now” explains singer Ronnie Atkins. It is an in-between album until the band completes the next studio album with new tunes.

Pretty Maids will appear in the spring and summer in selected dates in support of the new album’s release.
TURN UP THE VOLUME – DANISH DYNAMITE IS… LOUDER THAN EVER !

DVD: A Retrospective of the “Motherland” 2013 World Tour. Includes Archive footage from early stages
of the band’s career, interviews, backstage, Studio Footage and the usual freakiness.

Produced by Jacob Hansen
Posted by Jon Kirkman at 16:54