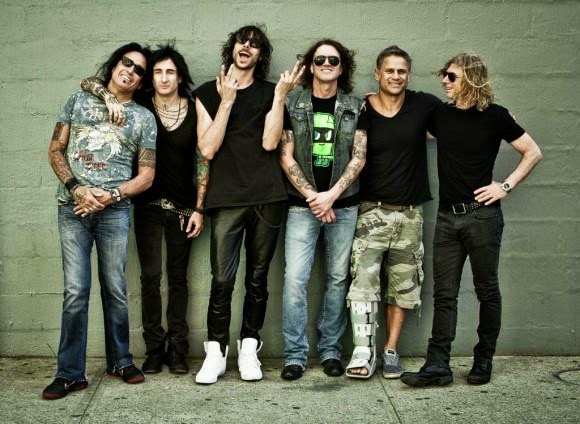 The Dead Daisies are a powerful musical collective with a rotating line-up that features some of the best Rock musicians on the planet and a sound that’s influenced by late ‘70s and early ‘80s hard rock – big choruses, powerful melodies and strong hooks. The Daisies release the Face I Love EP on September 8 through Spitfire Music/PIAS and are elated to announce a month-long US tour with KISS & Def Leppard in August.

The band will release their very own “Face I Love” App on their Facebook page on the 23rd June. Created to represent the iconic daisy skull logo of the band and allow fans to be part of the EP cover art and music video, Facebook users are able to upload an image of the face they love to the App to create a photo-mosaic portrait of The Dead Daisies skull – and make it bloom!

For this tour, KISS and Def Leppard will be honoring their dedicated fans in the armed services by partnering with numerous military organizations. All military personnel will be given exclusive access to discounted tickets for the tour and military charities will receive a portion of ticket sales with the money raised being split amongst all the non-profit organizations participating with the summer tour.
"I am pretty pumped to hit the road with The Dead Daises and bring some some kick ass, analog rock and roll music to all of you with the legendary KISS and Def Leppard and help make your  summer as memorable as possible," proclaims Dizzy Reed. "So fire up the grill, chill the beer and the Jager and get ready to ROCK! See you soon!"

The ‘Face I Love’ EP is now available for pre-order with the title track given away as an instant-grat track to those who pre-order the album.

his is set to be a busy year ahead for The Dead Daisies with more dates to be added around the world.

The Dead Daisies EP ‘Face I Love’ will be released on September 8th 2014 via Spitfire Music/PIAS.