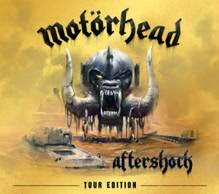 In October 2013, Motörhead released their 21st studio album, Aftershock, to great international acclaim and a slew of top 10 to 40 album spots.