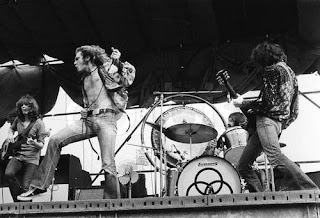 On 7th Sept 1968, Jimmy Page, Robert Plant, John Paul Jones and John Bonham made their live debut as Led Zeppelin but billed as Yard Birds (sic) at Teen Club Box 45 in Gladsaxe (a suburb in the outskirts of Copenhagen), Denmark. Around 1,200 youngsters attended the show at Egegard School. Teen Club President Lars Abel introducing 'The New Yardbirds' on stage introduced Robert Plant as Robert Plat. A local review stated; "Their performance and their music were absolutely flawless, and the music continued to ring nicely in the ears for some time after the curtains were drawn after their show. We can therefore conclude that the new Yardbirds are at least as good as the old ones were"

More about the ‘This Day In Led Zeppelin App’:

The App, which was first released last year, is a tribute to the hugely successful and influential band, and a way to reconnect with all of the elements of their amazing unique talent - all in one place.

This Day In Led Zeppelin’ features:

Song Notes
For every studio Zeppelin track ever released, with a unique link to play from your own iTunes library - or buy on the spot via WiFi internet link.

Zeppelin Trivia
Hundreds of notable notes in a fabulous file of Zeppelin facts.

Free Ringtone in a hard rock style
Unavailable elsewhere and unique to this App. (Not performed by Led Zeppelin).

Store
Links to the official Zeppelin stores for their music, merchandising and sheet music, plus LedZeppelin.com and the band members' own websites.

See the App in action: http://youtu.be/ZKx-h4FqKHE