The Who Release Archive Show From 1976 on DVD 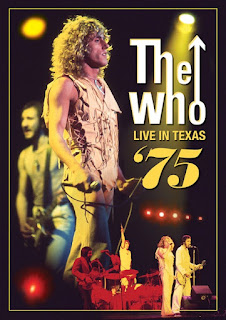 A new DVD focuses on the Who in all of their mid-1970s glory, capturing the iconic band on stage in Houston, Texas, at the start of a massive U.S. tour to promote The Who By Numbers, their seventh album.

The Who Live in Texas ’75, a 117-minute, 25-song set, arrives courtesy of Eagle Rock Entertainment on October 9, 2012. Long available only as a bootleg, this film as been carefully restored with Dolby Digital Stereo sound by Jon Astley, a longtime collaborator with the Who.

Guitarist Pete Townshend and singer Roger Daltrey, who continue today as the Who, are joined by their two late co-founding partners — drummer Keith Moon and bassist John Entwistle.

Highlights on The Who Live in Texas ’75 include an extensive section devoted to the band’s legendary rock opera Tommy, savage new versions of of early Who hits such as “My Generation,” another tough go at Eddie Cochran’s titanic “Summertime Blues” (echoing their performance at Live at Leeds from five years before), plus more recent Who fare like “Baba O’Riley” and “Won’t Get Fooled Again” as well as several cuts from The Who By Numbers.

A complete track listing is below.