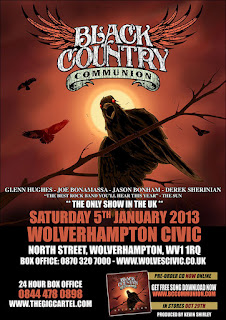 Following the news that their third album Afterglow released in the UK on Monday 29th October, supergroup Black Country Communion, the Anglo-American rock group featuring  guitarist/vocalist Joe Bonamassa, bassist/vocalist Glenn Hughes drummer Jason Bonham, and keyboardist Derek Sherinian, today announced that they will perform a one-show only UK concert in the heart of the black country, at the Wolverhampton Civic Hall on Saturday January 5th 2013.
Be the first to get tickets to this exclusive show. Do NOT miss the Classic Rock event of the year!

Tickets will go on sale to the general public on a strictly first-come-first-served basis from 9am on Friday September 21st via the 24 Hour ticket hotline 0844 478 0898 & www.thegigcartel.com.
Posted by Jon Kirkman at 10:05