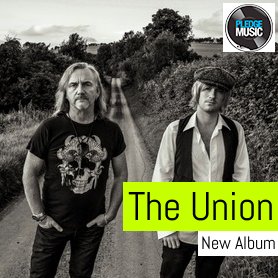 The Union Have released a news update on the recortding of the bands new album.
The Union: New album news!!!

Hello everybody!
Since ‘Siren’s Song’ has just been nominated for album of the year by Classic Rock magazine, we figured this was the perfect time to tell you all about our plans for album number three….
Since ‘Siren’s’ was released last October we’ve played a couple of successful UK tours as well as recently completing a goodly number of summer festivals across Europe so a big thank you to all of you that came along to share the experience.

Our new album will be entitled ‘The World Is Yours’ and will be released February 11th 2013. We’ve been busy working on the new material (weʼre delighted with the results so far) and we want to offer you all the chance get involved early by pre-ordering or making a ʻpledgeʼ on the forthcoming album. Thereʼll also be a number of rare, signed and VIP goodies on offer so whether you fancy joining us in the studio for a day or simply to be a VIP at one of our gigs, we want you to be in the loop!
Whatever you pledge on, you’ll receive a pre-order download of the album (delivered once the album is released) plus exclusive PledgeMusic updates so you can follow our progress via video diaries, blogs, photos and maybe even the odd sneak preview of the album.

A percentage of proceeds will also go to Childline Rocks so you’ll get to feel virtuous and help a great cause at the same time!
We’ll be working towards a minimum of pre-orders to make all this possible and you’ll be able to keep track of our progress with the percentage bar above. No money will be debited from your bank account until we hit 100%.

We’re really looking forward to working with the good people at PledgeMusic. At a time when the music industry’s future is uncertain, they are enabling lots of artists to get their music out there by involving fans at an early stage of the creative process. We want you guys to get involved too because together we can help secure the future of great music!

Thanks for your continued support,
Luke & Pete.