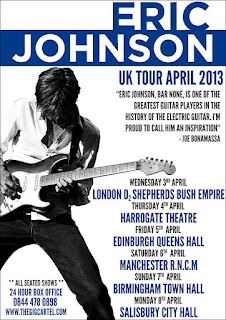 Eric Johnson, the celebrated American electric guitarist, hailed by Joe Bonamassa as “one of the greatest guitar players of all time,” returns to the UK in 2013 for a tour that kicks off at the London o2 Shepherd’s Bush Empire on Wednesday 3rd April.
The 6-date tour will showcase material from his current album Up Close, as well as from his rich back catalogue, including the classic Cliffs of Dover.
Tickets will be available on a general on-sale date of Friday 28th September from www.thegigcartel.com and 0844 478 0898.

Eric Johnson is also a respected acoustic, lap steel, resonator and an accomplished pianist and vocalist. He’s best known for his diverse array of music genres evidenced by many different styles incorporated in his studio and live performances, including rock, blues, jazz, fusion, folk, New Age & country.
Guitar Player magazine called Johnson "one of the most respected guitarists on the planet.” His critically acclaimed, platinum-selling 1990 recording Ah Via Musicom produced the single Cliffs of Dover, for which he won the 1991 Grammy Award for Best Rock Instrumental Performance (the track also appeared in Guitar Hero 3 – Legends of Rock.)

In 1996 he joined forces with Joe Satriani and Steve Vai for the original and legendary G3 tour that garnered a worldwide audience with the platinum selling CD/DVD.
Johnson’s best known for playing stock Fender Stratocasters and Gibson ES-335 electric guitars through a triple amp setup, consisting of vintage Fender and Marshall amplifiers.
He plays vintage Stratocasters but also his ‘Fender Signature Stratocaster’ model, which is one of the best selling instruments in the Fender catalogue. He also designed a Signature acoustic guitar that was released by Martin guitars. 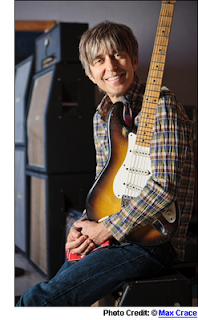