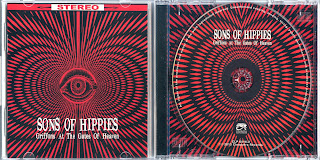 My first exposure to Sons Of Hippies was seeing them live in concert about a month ago. They played a gig with multiple bands in Fort Worth, Texas. Yours truly was on assignment reviewing the concert, but really my main focus was on the prog-rock group Nektar. As a bonus, I got to see the group Sons Of Hippies and be exposed for the first time to their sound. The band members were much younger than I. Not so much so with my wife, who was also with me. Twelve and a half years younger than Uncle G, my lovely wife Alexandra dug the band from the get-go. Sons Of Hippies held her attention throughout their set. The lead singer, Katherine Kelly,  is a talented young lady and interesting to watch perform, as is her male band mates Jonas Canales (Drums, Korg, Percussion, and vocals) and David Daly (Bass Guitar and Vocals). A solid rock n’ roll three-piece band diving into the modern psychedelic sounds of today.

Fresh from the fine people at Cleopatra Records is Sons Of Hippies debut CD called; Griffons At The Gates Of Heaven. It has been in a steady rotation around my house the last week. If I had a dollar for every time it played, I’d have enough money to buy Alexandra and myself a nice meal someplace. And speaking of eating, recently when having a friend over for dinner, I had Griffons At The Gates Of Heaven playing in the background. After most of the CD played, I asked our younger friend what he thought of the sounds. When reviewing something I like to get other people's opinion. He described it as lite alternative and told the wife and I that it was, "better than anything being played on The Buzz nowadays."

When I listen to new music, my mind registers memories of other music that I think has the same vibe. In the case of Sons Of Hippies, I do the same, although most are bands with prominent female players. Odds are, this is due to Katherine’s vocal sound or style of delivery. I hear some of a Goth band I use to dig back in the nineties called Switchblade Symphony. Here’s another comparison, in an almost 180 degree turn, and with the harmonies, I hear The Bangles. Both are included in Uncle G’s Top Ten List of bands with female rockers in them.
Sons of Hippies new CD  Griffons At The Gates Of Heaven besides including the main trio, also includes a few guest artists. One is prog rock's multi-instrumentalist Billy Sherwood. I know Billy from being a pivotal member in the 1990's progressive rock band I liked called World Trade. From there I learned more of what Mr Sherwood was capable of via his association with Yes’ Chris Squire. He would later on earn himself a place in the legendary progressive rock legendary band. Billy worked in Yes as a musician inside and out of the group, and also behind the scenes in the recording studio. On Griffons At The Gates Of Heaven, Billy Sherwood is behind the keyboards playing some of the coolest 1970’s retro keyboard sounds you’d ever want to hear. At one point, I’m reminded of the wonderful electronic sounds usually found on Steve Miller albums. Sherwood acts as a solid member here, complimenting the Sons Of Hippies sound with his Mellotron and Moog playing appearing throughout the album.

An interesting fact, Andy Walter at Abbey Road Studios in London, England, mastered Sons of Hippies: Griffons At The Gates Of Heaven. The same walls hearing the sounds of old psychedelia are now filled with what can be defined as the modern psychedelia of the day. Fits the whole package here very well. More SOH history, the new album is produced by legendary Seattle producer Jack Endino.
The Music: This is what motivates me as a one-day award winning Internet writer, type several hundred words on what excites me when discovering a sensational new band. Someone I never heard of until just about six weeks ago.

Besides Ms. Kelly in Sons of Hippies, we have two extremely well versed musicians; Jonas Canales (drums, Korg, Percussion, and backing vocals) & David Daly (Bass Guitar and backing vocals). These dudes along with Katherine’s guitar bring to life Katherine’s beautiful poetry. Thought-provoking words that in themselves are a part of what makes Sons Of Hippies work. In the 1960's, it worked all too well with a band called The Doors. The word "Doors" in the group's name symbolizing different alternate thinking moods. Each set of poems / lyrics on Griffons At The Gates Of Heaven display different ideas, and then seems mixed in with a vibe that fits. Every track is very well done from start to finish.
Rating: I think Sons of Hippies: Griffons At The Gates Of Heaven starts off well and then keeps getting better as the CD plays. Once finished, it begs to be experienced time and time again. All twelve tracks presented well and from experience I can tell you translates into a rocking good time when played live.