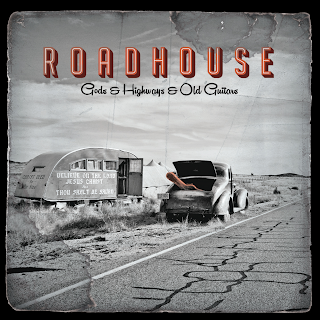 August 2013 will see the long awaited new album from Roadhouse released following on from their critically acclaimed DARK ANGEL album released in 2011.

The concept behind GODS & HIGHWAYS & OLD GUITARS was to route the music even more firmly in the Americana genre but still retain the signature Roadhouse blues/rock backbone. Eight out of the ten tracks have Americana based content but the album also uses blues structures more than any previous Roadhouse CD, while avoiding the tired cliché of standard blues structure or chord sequences. There is also a stronger reliance on the female vocalists with four tracks featuring a female lead vocal and others featuring a female driven chorus

The CD starts and finishes with the kind of epic Blues/Rock that the band is famed for, while the remaining eight tracks feature far more radio friendly tracks than on any other previous release, the songs being shorter and more accessible.

The album opens with Hell On Wheels a heavy riff driven slice of Americana and a typical Roadhouse opener. However the central hook is very strong and certainly stays with you. A song about the girl you can't tame, more likely she's going to tame you. The track Skinwalker is pure Native American Folklore; there are vampires, werewolves and also Skinwalkers. They may walk and talk like you, but something evil has taken residence, this really is a song of dark folklore. On the title track Gods & Highways & Old Guitars, Mandie.G takes lead vocals on this tale of a female rock and roller stranded in a desert town, looking for a new band. Slow Down is a blues shuffle with a strong and sexy lead vocal from Sarah Harvey-Smart on a song about the girl who just has to say no to the egotistical loser who is in pursuit. Final track, Sinner is familiar dark epic territory for the band - shades of sin and desperation in the mould of their live favourite Preacher Man, inspired by film noir, black and white classic movies like Night of The Hunter. 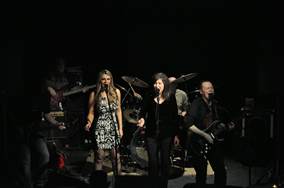 Roadhouse are a great hard working British band and they have shared the stage with a veritable who’s who of international artistes including Walter Trout, Joe Bonamassa, The Animals, The Yardbirds, Dr Feelgood, Nine Below Zero, Wilco Johnson, Mick Taylor (Rolling Stones), Pat Travers and many more. A true festival band, they have played at many festivals all over Europe including Glastonbury in 2010 and they play regularly at the Blues/Rock Festival held every year at Butlins in Skegness. 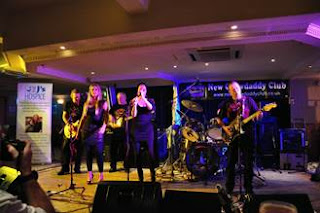