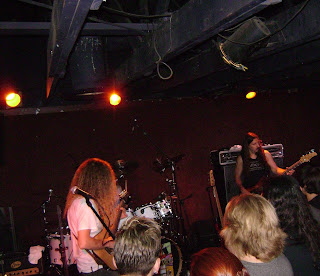 My wife and I arrived around seven p.m. at Rudyard's, a British Pub found in Houston's Montrose area. The doors opened at nine p.m.,  with the show starting at ten. Taking our time before the nights festivities, the wife and I both had an incredibly delicious fish & chips dinner. Like the saying goes; "When in Rome, live like the Romans do." I was after all in a British pub. And I must say, a welcoming place to stop by anytime. So when in Houston, try to check them out. A super menu. Cold beer and engaging spirits, I hear they serve up a mean hamburger as well.

A few minutes before nine p.m., we were allowed to go upstairs to where the concert would take place. Finding seats nearby the bar, we made ourselves at home allowing for the more energetic ones to stand in front of the stage throughout the whole show. The room was equipped with a camera and two screens to watch the entertainment. The both of us were comfortable, especially after ordering a beer, that we shared. We're not the BIGGEST consumers of alcohol. Every blue Moon...why not? After all, it was a GRAND occasion. For when the show started, on that stage in front of us; The Aristocrats.

OK...so who is The Aristocrats? The answer: an instrumental rock / jazz fusion band (no keyboardist). Right now they just released their second studio release, Culture Clash, which by the way is currently climbing the sales charts. Released recently and then promoted by a US Tour in which they just finished. Dallas, Texas had the honor of being the last stop (25 Aug 2013). Houston was the second to last, and this was the one yours truly and my lovely wife, Alexandra, had the pleasure of attending.


Bryan Beller (from America - Bass) / Guthrie Govan (from The UK - Guitars) / Marco Minnemann - (from Germany - Drums / Percussion)
Noticeable Accomplishments (Could type thousands of words here. Will mention just enough to give you the reader a better understanding of the musicians being focused on -- and get this...in one hundred and fifty words).


"Govan started out with his feet firmly planted in classic rock with a lead guitar position in the band, Asia. A GREAT line-up that included original member Geoff Downes and one time AC/DC drummer, Chris Slade. Just recently Guthrie played guitar and toured with Steve Wilson, appearing on his recently released third solo album; The Raven That Refused to Sing (And Other Stories). Speaking of Wilson's new release, Marco Minnemann also appeared on that release playing drums and percussion. Meanwhile,bass player Bryan Beller is also a member of the death metal band Dethklok. You might know them if a viewer of cable TVs Adult Swim; Metalocalypse. You'll also know Bryan's work if a fan of Steve Vai or Dream Theater's James LaBrie. Research yourself either of the three members. All three gentlemen are skilled musicians with an impressive resume' worth discovering if one has not done so already."


The sold out concert started out with a couple songs from their debut album. The self titled The Aristocrats. One of these a favorite of mine, a number entitled "Sweaty Knockers". From there it was a two-hour blast of Aristocrats songs from not only their first studio release, but also from the very studio release that they were currently touring called Culture Clash. A well paced performance of mostly upbeat, energetic instrumentals, but that of good humor as well. Throughout the evening each of the three members took to the mic to introduce songs, entertaining the crowd with personal antecdotes and stories associated with the group and the music being played. The crowd responded well. A fun time was had by all.
After the performance, all three guys worked the room of fans, signing autographs and taking pictures. A very cool and laidback atmosphere. So much so, I got to introduce myself and talk briefly with each of the members. 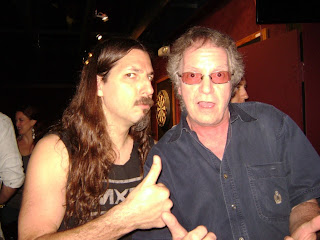 The first one I walked up to was drummer, Marco Minnemann. Knowing the guys didn't have the free time for a lengthy interview, I mostly kept to one subject with each of them. Ordinarily, I'd be asking questions about the new release. Touring Culture Clash is after all what brought them to Houston to begin with. Now turning into a meet and greet session and everyone from the sold out event still in attendance, I just went with the first thing that popped out of my mouth, when in the company of each of The Aristocrats members.

Was just a few weeks back that I viewed a fairly new UK (the band) DVD that had Marco on drum duty (Live In Japan, 2012). So I had to ask what it was like playing with such an outstanding prog band that had legendary musicians Eddie Jobson (keyboards, piano, and violin) and vocalist - bassist John Wetton (Original Asia - ex King Crimson) as members. Marco replied back with a little joking around, and then a sincere acknowledgement about how incredible it was to get the opportunity to play with them.


Bryan Beller was next. In my opinion, the dude is an extraordinary bass player. Can say the same of both Guthrie and Marco in their respective fields. I don't play an instrument myself, but I have always admired those who can, especially individuals who devote their life mastering their craft. But instead of saying any of that; I walked up, introduced myself, and thanked Bryan for always finding the time to answer my Facebook inquires. Writing for such a cool Internet radio station such as the one I do does have it perks. Politeness should come first. I have mentioned The Aristocrats in past columns. Bryan signed my NEW Aristocrats CD Culture Clash, and we concluded our time together after a very nice guy from the crowd volunteered to take a picture of the both of us. Did a good job too!! 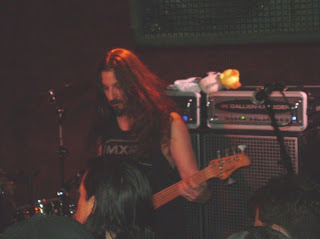 Guthrie positioned himself right behind  where my wife and I sat for the evening. After finding a place at the bar and enjoying a refreshing brew (remember...British Pub), Mr. Govan gladly interacted with anyone who approached him. One guy, after lavishing praise, even gave him a hug. My time was spent reminiscing about a previous gig I saw Guthrie at more than a decade before. As I previously mentioned, Guthrie was at one time the lead guitar player for the band Asia. The first date that was set for that gig was rained out due to Tropical Storm Allison. So bad was the rainfall that the city of Houston damn near became the new underwater Atlantis. A couple weeks later there was a make-up date. it was over a hundred degrees in the shade that day. I concluded the trip down memory lane by thanking him as I did the other two, for coming to Houston and including us in their tour schedule. One thing I regretted later not saying to Guthrie was that it's been cool keeping up and listening to his new projects since that time in Houston, back at the turn of what was then a new century. His progress since then has been extraordinary. For one thing, Guthrie's become the God of guitar tech films (as seen on YouTube). What a fanbase. Serious players dig this guy, as well as the casual music listener.


Worth Mentioning: I remember seeing The Aristocrats (the band) shouting out on Facebook for a person who might be interested in running their merchandise booth for the tour they just completed. The one who took the position ended up being a pretty cool dude named Corey Madson. We talked for a few minutes, in which he sold me a tee-shirt and the band's Culture Clash CD. Was very friendly. Told me how great an experience it was for him to be able to do the road trip with the band (and Chris Del Nostro, the bands stage tech / cargo van driver). Regarding the merchandise table, it was filled with interesting Aristocrat products plus items from individual band members past projects. All reasonably priced. As a concert goer, I appreciate a well run and fairly priced souvenir stand. Good job Mr. Madison / The Aristocrats. Matter of fact, the price to get in the door was only twenty bucks. With the average American having less disposable income nowadays, keeping the price affordable for an evening out is much appreciated. Thanks to all involved for making that happen.

From The Aristocrats Official Facebbok page on what happens now that the Culture Clash US Tour is over; "Guthrie flies home and Marco and I (BB) fly to San Diego for the start of the Joe Satriani tour."

Closing Comment:
I recommend seeing Bryan, Guthrie, or Marco anytime they are in your area. Be it as The Aristocrats or as individual musicians. Serious professionals yet pretty down to Earth guys. Uncle G always finds it a pleasure to support players such as these. 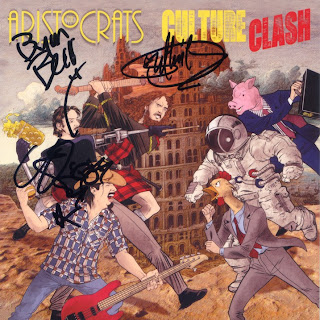