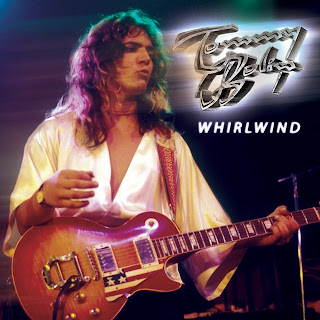 Los Angeles, CA – A spectacular collection of rare and unreleased recordings from famed guitarist of Deep Purple, James Gang and the Billy Cobham band, Tommy Bolin will be released on August 13th by Purple Pyramid Records. 'Whirlwind', produced by Greg Hampton and Johnnie Bolin, features rare material from Bolin's jazz-rock band Energy, an epic 26-minute version of “Marching Powder” (here called “Marching Bag”) from his first solo album 'Teaser', as well as songs Tommy was preparing for his third solo album before his untimely death in 1976.

Tommy Bolin 'Whirlwind' will be released in both a beautiful 8-panel, 2-CD digipak and a 2-LP gatefold vinyl set. For the ultimate collector, Purple Pyramid Records will be releasing a special limited (1000 only) deluxe box edition of this exciting collection, which includes the 2-CD digipak plus 4 color postcards, a Tommy Bolin signature guitar pick, collectable patch and pin!

Says producer Greg Hampton, “Tommy's music was way ahead of its time. He's one of the truly greatest guitarists to ever live, and he left an incredible legacy that will continue to influence and inspire musicians forever. The tracks on 'Whirlwind' are remarkable because they give you a glimpse into the amazing diversity Tommy was capable of.”

Check out the promotional video featuring rare footage of Tommy Bolin tearing up the stage:
http://www.youtube.com/watch?v=dp-O9n72LWo