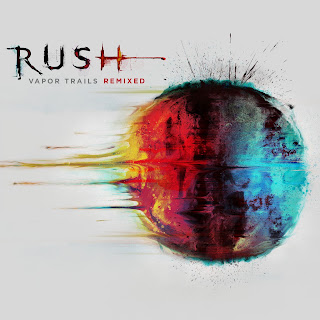 Both Are Available On September 30 From Atlantic/Rhino


With a career that spans nearly 40 years, and music that continues to inspire and influence new generations of artists and fans alike, Rush has become one of the most beloved bands of all time. This past April in Los Angeles, Rush took its rightful place alongside other music heavyweights when they were inducted into the Rock and Roll Hall of Fame.

This year’s celebration of Rush continues with the highly anticipated release of a remixed version of the band 2002’s album VAPOR TRAILS. In 2009, two tracks from VAPOR TRAILS (“One Little Victory” and “Earthshine”) were remixed for theRetrospective III collection, setting fans into a frenzy in anticipation of a possible remixed version of the entire album being released one day. Four years later, that day is finally approaching as the remixed album will be available on September 30 from Atlantic/Rhino.

"Vapor Trails was an album made under difficult and emotional circumstances - sort of like Rush learning how to be Rush again - and as a result, mistakes were made that we have longed to correct. David Bottrill's remixes have finally brought some justice and clarity to this deserving body of our work,” says Geddy Lee.

"Every song has been given a new life, from the fire of ‘One Little Victory,’ ‘Secret Touch,’ and ‘Ceiling Unlimited’ to the melodic musicality of ‘Sweet Miracle’ and ‘How It Is’… these songs have been redeemed. Thank you David!"

The remixed version of VAPOR TRAILS will also be included in the new 7-disc boxed set THE STUDIO ALBUMS 1989-2007, which features every studio album Rush recorded for Atlantic Records. The collection includes the Gold & Platinum albumsPresto (1989), Roll The Bones (1991), Counterparts (1993), and Test For Echo (1996), as well as their covers EP Feedback(2004) and the Billboard Top 5 album Snakes & Arrows (2007).

THE STUDIO ALBUMS 1989-2007 features each album presented in a wallet sleeve that faithfully reproduces the original artwork (except for VAPOR TRAILS, which features a reinterpreted version of the original cover) and is available on September 30 from Atlantic/Rhino.
Rush is currently wrapping up the final shows of their triumphant Clockwork Angels 2013 tour with a finale on August 4 in Kansas City, Missouri. For more information and other Rush-related news, please visit the band’s official website, www.Rush.com.

With more than 40 million records sold worldwide and countless sold-out tours, Rush – Geddy Lee, Alex Lifeson, and Neil Peart – is not only one of the most inventive and compelling groups in rock history, but remains one of the most popular.  The RIAA® has certified Rush for the third most consecutive gold/platinum studio albums by a rock band, topped only by the Beatles and the Rolling Stones.  Rush’s vast catalog includes such classics as 1974’s self-titled debut, 1976’s 2112, 1981’s Moving Pictures, 1996’s Test For Echo, and 2002’s Vapor Trails. Rush released their 20th studio album, Clockwork Angels, in 2012 via Anthem/Roadrunner Records.

The highly anticipated collection marks their first studio recording since 2007’s Snakes & Arrows, and debuted at #1 in Canada and #2 on the Billboard 200, matching the highest chart debut of the band’s career.  In addition to their commercial success, Rush has also been recognized with a number of Juno Awards and multiple Grammy® nominations, including one for the acclaimed documentary “Rush: Beyond The Lighted Stage.”  Enjoying a recent pop culture renaissance, Rush made a rare television appearance - their first in over 30 years - on Comedy Central’s “The Colbert Report” and a memorable cameo in the film “I Love You, Man.”

Most recently, Rush has been inducted into the Rock and Roll Hall of Fame.  This year, Canada’s national newspaper The Globe & Mail called Rush “one of the few bands anywhere that just keeps getting better.”  A career-chronicling Rolling Stone feature summed up the renowned rock trio’s continuing artistic vitality by observing, “It’s true that Rush doesn’t mean today what it did in ’76 or even ’96. It may mean more.”
Posted by Jon Kirkman at 11:54