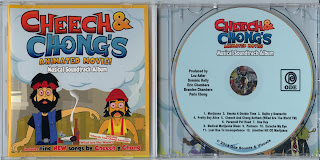 Instructions: Repeat chorus and dance around like a fool. More fun in your underwear if listening to within the confines of ones own home.
Some of the coolest dudes to ever walk the planet man, are back; Cheech& Chong. And somehow they miraculously after decades of threatening to, found themselves in a recording studio with Lou Adler being one of the producers, and made a new album. I’m in shock!!

For a couple decades, fans of Cheech & Chong hoped for a reunion. And then it happened. After that, rumors of new movies, and various other projects including performing in concert again (yours truly seeing them twice in recent years) and television appearances.

Check it out Man. This is where the STUFF is. Includes NINE, count them NINE brand new songs (DON’T FREAK OUT) that are in essence NEW C & C sketches. So here it is mostly stoner folks who are reading this – word for word -- after all this time has gone by…A BRAND NEW CHEECH & CHONG ALBUM. Now YOU can say it; Like WOW Man!!

Not to give everything away, but I will tell you the new material celebrates the old, while making references to today’s twenty-first century world. It’s great hearing the old names / characters mentioned. Just as AWEsome is the guys new material. Put it all together and it’s an incredibly funny listening experience that begs for the repeat button to be hit once the disc stops playing.