Spotlight: The Who: Live In Texas '75 (Eagle Vision) 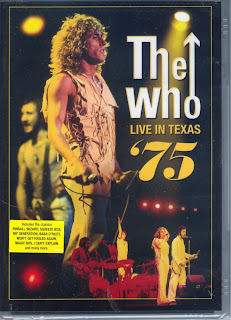 
If I was a little older, I might have seen The Who earlier then I did. My first time out of two occasions was at Madison Square Garden, after original drummer Keith Moon, passed away. His replacement for the longest time was Kenny Jones. This is back in '79. For one hundred dollars I got two floor seats, at least 15 rows from the stage. At times in front of me I saw more girls asses from being perched on guys shoulders then I did the band. Just turning legal I was cool with that. All a part of the 'in concert' scene.

On November 20, 1975 I was fourteen years old. I have attended one real rock concert by this time, seeing prog-rock giants Yes perform a spectacular outside show at Roosevelt Stadium in Jersey City, New Jersey that previous summer. What made that November date special was that was the first show on The Who's US leg of the Who By Numbers Tour. Held in an indoor twenty thousand seat auditorium called, The Summit. The whole concert recorded by in house equipment. For me being such a BIG fan of The Who, this DVD represented an opportunity to see a full show by the original line-up. Thing was, I already saw it years ago. Only difference now is that I own The Who's officially released product of the event. Before it was memories of seeing what could have very much been, the ORIGINAL in house recording. The one with the time stamp.

When I asked who at the time would have been described as a friend, how he got this rare film, his only answer was; "It didn't matter." I later on found out this man to be a total scumbag. He boasted even having communications with The Who's management about the video. Sounded like blackmail really. The dude wanted a fortune, I'm sure. After all, it takes lots of money financing a drug habit. OH...(insert pause)...did I say that? I was actually taught better. Shouldn't talk bad of the deceased.

I cracked open the DVD when having a much newer friend over. A professor in photography at the University Of Houston. Younger then I but nowadays who isn't.  Charlie Morris is his name. We share some interests including classic rock, with the both of us life long Who fans. Once the DVD started playing, all we could collectively say was; "Pass the bowl" (of chips of course)...only kidding...more like; "Wow!!"

Lots of favorite moments here from watching the DVD. Seeing Entwistle on the side of the stage at times, an acknowledgment that he's even there. The camera's main focus is on,the bands main song-writer and lead guitarist, Pete Townshend. Then Mister Daltrey who at this time, still has his signature locks going on. The hair was cut short when I first got to see them in New York City. At the Houston show a few years earlier, Daltrey twirled his microphone and would look at the audience at times appearing to dare anyone from coming up and taking a poke at him. Not that anyone could pass security and get on stage to do so. Houston audiences do have a reputation. Part of which is being rowdy if the occasion calls for it.
The highlight and main reason for me purchasing The Who - Live In Texas '75 DVD is getting to witness Keith Moon's performance. As good as I always imagined. I wish the camera was on him more. Seeing Keith behind the kit and playing all the iconic material is INCREDIBLE.  Moon's there body and soul displaying his talent as a rock drummer while also displaying his trademark sense of humor.

A bonus about the DVD is it's in real time. No editing out several minutes of applause. You wait like everyone between songs. This DVD gives the viewer the opportunity to hear and see for yourself the group acting themselves in what appears a very natural environment for them. No first show jitters after a break in the tour schedule. Just carrying on where they left off. All four rock musicians knew the material well enough to command it, and the Houston crowd on this particular evening, lucky enough to experience The Who, first hand for themselves.

Rating: Eagle Vision did an excellent job here. But just so we're on the right page, it's re-stored meaning the version they are selling you is equal to and maybe even better then all the bootlegs of this that have been going around for years. The one I saw had better picture quality. Not equal to today's HD picture and not containing all the technological advances in audio that one would expect in the year 2013. Taking into account just how rare this is, I don't mind that it's not perfect in every way. So using a one to five star rating system, I rate The Who - Live In Texas '75 DVD...four and a half stars. Sorry not five. The special effect visuals at time irritated the shit out of me. So did the camera almost consistently on Townshend and just about ignoring the WORLD'S BEST rhythm section all together. Still worth having for EVERY Who fan out there. Invite some friends over, and have fun for the next two hours witnessing one of the best rock bands, filmed while in their prime. True rock legends in my opinion and watching this DVD will certainly demonstrate why that is.
Sample: Official Eagle Rock YouTube Clip - The Who from the DVD Live In Texas '75, the song; Baba O'Reily


Note: I don't know WHO does their website, but I took a slight insult when doing research and finding the following web-address attached to the product on The Who's endorsed website. Read carefully:

http://www.thewho.com/story/the-who-live-in-texas-75-dvd-now-out-on-the-range/
"Out On The Range" -- I been living in Space City since 1986. Attention: Houston is a modern if not futuristic city. No tumbleweeds blowing down our streets that I'm aware of. Texas is a BIG State. The word "range" would be better defined if The Who would have played say, El Paso. Just Sayin'.

Note: The venue that this was filmed at is still around. By car I'm about twelve and a half miles from it. Off Interstate 69...Hwy 59...what use to be called The Summit, is nowadays known as; The Lakewood Church. Known world-wide because of it's pastor Joel Osteen, and his wife wife Victoria, the church's co-pastor. It's Sunday services have an in house audience of over 40,000 people.   A nondenominational Christian megachurch that also has a devoted television audience. Those who have said they enjoyed catching the service on TV; Cher and keyboardist Gregory Zyskowski (new age artist Greg Z) from a new prog-rock band that has risen from the wreckage of the Jersey Shore after Hurricane Sandy called, Overture. Speaking of which, the bands debuting new material on their official i-Tunes page. Worth checking out. Note to Self: Self...am looking forward to more new music from Overture in the near future.
Gary Brown
American Corespondent for Classic Rock Radio Dot EU