THE BAND OF FRIENDS A celebration of the music of Rory Gallagher: ‘Live’ In The UK, November 2013 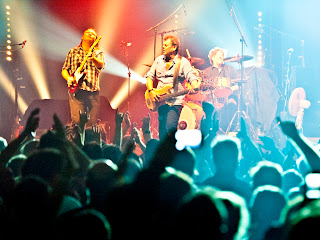 THE BAND OF FRIENDS

A celebration of the music of Rory Gallagher: ‘Live’ In The UK, November 2013

Not just the notes – but the sound, energy and feel of Rory Gallagher, delivered by people who helped define it

"Really has the atmosphere of a Rory concert"
– Lust For Life

"This is not a tribute band but a group of its own.
The trio work wonders." – Rock & Folk

"Sparks fly from the first note. The Band of Friends
is pure cracker." – Bluesfocus

In the era of tribute acts who deliver note-perfect renditions of their heroes' catalogues, The Band of Friends is something different. They can do the notes played by electric blues icon Rory Gallagher. But they can also do the sound, energy and feel – because the band includes people who helped define those essential elements.

When the Irish guitarist-vocalist passed away in 1995 he left behind an eleven-album catalogue of inspired albums, and the memory of unforgettably energetic concerts.

"Gerry and Ted were no backing musicians. They were part of an integral unit that allowed the maestro to present his prodigious talent. Plenty of body language was what I remember. Little nods here, smiles there and just enough ad lib without over milking the solo breaks. The tradition continues with Marcel."  Noel Buckley (Get Ready To Rock! )

They old friends have teamed up with Dutch guitarist and vocalist Marcel Scherpenzeel [Wolfpin], who grew up with his bandmates' music. If they say he's the nearest thing you'll get to Rory – and that's exactly what they do say – you'd better believe them.

Ted recalls: "In 2010 Gerry told me he'd played with Marcel at a tribute show and thought he was the closest thing to Rory you'd ever hear. We got together for a play in Marcel's dad's blues club in Amsterdam. The impact was instant."

Gerry says: "Rory will always be close to my heart, of course. Playing tribute shows was one thing – when I heard Marcel I knew he had it all. Close your eyes and it's there."